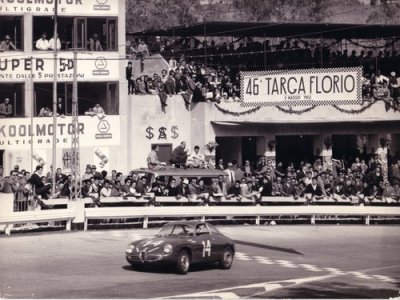 The 101st Targa Florio, to be held in Sicily from April 20 to 23, will be a special edition, marked by the sign of continuity and also being the new, opening act of the second century of its glorious history.

ACI Storico and ACI Palermo are writing new chapters of “a Cursa”, to reinforce its historic value, to maintain the myth and to give the right meaning to its annualsuccess among its enthusiastic fans. The path was traced last year and the proof that the challenge is still alive and it is having great success comes from the many confirmations and the first entries for the Targa Florio Classic, opening round of the Italian “Grandi Eventi” Championship. Alongside the organizers and all the people involved in the event there are the drivers and those that want to support and promote the race.

Alfa Romeo and Abarth are the main sponsor of 101st Targa Florio.These two brands will dedicate special attention to “a Cursa” and they will be involved in different initiatives. While Alfa Romeo will follow closely Targa Florio Classic, Abarth will be closer to the Targa Florio Rally race.

The ambition to be part of the Targa Florio and the competitive spirit of each true motorsport and automotive lover lead many drivers to race the Targa Florio of the third millennium. Some drivers take part in it for the first time, some others come back every year on the roads between Palermo, the Madonie Mountains and the Mediterranean coasts, just like David Anglard and his 1968 Lancia Fulvia Zagato Competizione from the United States, but also John and Timothy Piccin with their 1952Ermini 1100 Sport.

From Germany Christof Von Branconi and Ming Yuan from Shanghai on a 1975 Jensen Interceptor Convertibile and Watanabe Takashi e Sugiura with a 1957 Bandini 750 S Saponetta del 1957. From Czech Republic Pavel Zabran and Pollak Jirka on their 1925 Tatra Special Targa Florio, then the Dutch crew formed byPieter Van Berkel and Carola Adrighem with their 1939 Fiat 500 Sport Zanussi. Among the Italian drivers Antonio Perfetti and Augusto Costantini on their 1956 Ockelbo Simca & Sport Barchetta and Sandro and Filiberto Brozzetti with a 1930 OM-665 SSMM Zagato built in 1930.

Targa Florio, the oldest race in the world celebrates its 100th edition. Four motor sports events, vintage cars and drivers, reconstruction of the famous stretch of the Targa Floriopoli-Cerda

“Carry on with what I have done because I created it to challenge time” these were the words of Vincenzo Florio during the first edition of “a Cursa” held on 6 May 1906. Prophetic words that will find their consecration in 2016 when the 100th edition of the oldest race in the world will be held on the Sicilian roads of Madonie and others, from 5 to 8 May.

Sicily is a land rich in great motor sports traditions, history and passion, so much so that it is still one of the most important regions in our country at a motoring level. A land that has given important pages of ohistory and where the infinite love for cars goes hand in hand perfectly with the great professionalism of those who continue to organise unique races year after year, all-important events in their respective categories.

Targa Florio is clearly the flagship of this great tradition. A unique competition for a unique location; a competition which was already designed and created in a totally modern and revolutionary manner back in 1906.

The exclusiveness of the event, which will be held in Sicily from 5 to 8 May 2016, is the result of the far-sightedness and genius of the man responsible for coming up with the race in 1906, the unforgettable Vincenzo Florio.

The 100th Targa Florio is also able to rely on a unique feature in Sicily: the Sicilians‘ passion for motor sports in general and for the Targa Florio in particular. Not only is Palermo province involved, but the whole of Sicily is involved, in what is the evolution of an Italian asset appreciated in Italy and worldwide.

Memories of a glorious past featuring unique models and drivers will be the stars of the Historic speed. A dynamic catwalk which will pay witness to a procession of cars and some of the drivers of the historical speed race on the legendary course running from Floriopoli to Cerda.

The roar of racing engines will return in front of what is considered to be a genuine monument to world motor sports, home to the pits and race management in the days of the Targa Florio speed race.
But the Targa Florio Classic will be the real date with the great history of vintage motor sports, the exclusive regularity race reserved for cars of special historical and sporting prestige.

The Classic will make it possible to relive the emotions of days gone by thanks to the most beautiful cars in the world, built between 1906 and 1970, which will once again challenge each other on the roads which, in the past, witnessed the feats of champions of international standing such as Fangio, Varzi, Minoia, Nuvolari, Merzario and Vaccarella.

The race, reserved for speed specialists, will succeed in bringing together today, as in the past, competitive adrenaline with Sicilian charm, discovering the most appealing locations rich in art, nature, history and tradition. From the red carpet at the start line in Palermo’s stylish city centre to the attractions of the province, before reaching as far as Agrigento and the Valley of the Temples. Each stage will enjoy the warmth of the Sicilian public who will crowd street kerbs to greet the cars passing by.

Three stages and four days in the company of cars and Sicily’s beautiful attractions. On 5 May, the sports and technical checks will be held, the “departure village” will be opened in Palermo and celebrations will take place in the evening for the 100th edition.

The cars will start on the first stage on 6 May at 9.00 am in the centre of Palermo heading for Cefalù and returning to the city along the charming “Circuito delle Madonie”.

The second stage of the competition on 7 May will see the cars leaving from Palermo at 8.00 am in the direction of Agrigento and the amazing Valley of the Temples before heading back to Palermo in the afternoon. Departure is scheduled at 9.00 am for the third and last stage of the “Classic” on Sunday 9 May. The cars will leave from Floriopoli for Cerda to attend Historic speed. The Classic cars will cross the finishing line in Palermo in the evening.

Register for the competition at http://www.targa-florio.it